Republished because love and cooperation is what we all need right now:

When you want to see international cooperation in action, look to music. Asia Kindred Moore (American harpist), Georg Börner from Germany, playing a Swedish Nyckelharpa, Erich Heimansberg (German flute player) and Pablo Ursusson, Galician songwriter and singer, sing in Galego, the language of Pablo’s home. Together they make up Sangre de Muerdago. And when the American and the Germans need to harmonise with Pablo in Galego, they do, just fine. This song is called A Chamada da Néboa/The Call of the Mist:

The green Galician landscape and the people moving through it shaped and continue to shape the words of Galego. And when the Romans arrived, bringing the language they’d forged to suit their own sunny homeland, little by little the local landscape and the local people added a green shade.

“The living language is like a cow path: it is the creation of the cows themselves who, having created it, follow it or depart from it according to their whims or their needs. From daily use the cow path undergoes change. A cow is under no obligation to stay”

When your landscape is a landscape of mossy rocks, you keep your own soft, rounded word for ‘stone’: croio, rather than adopting the sharper Latin petra, born as it was in the dry, volcanic landscape of Ancient Rome.  That sound picture of close-together, pointy ‘p’ and ‘t’ sounds just don’t fit what you see around you in green Galicia. So you keep croio for family and friends, and when you have to speak to the Roman invaders, you use their word but soften it, rubbing the sharp edges off the central ‘t’ and turning it into a smoother ‘d’. To suit the world around you, while co-existing with people who’ve brought their own landscape with them in the shape of their words. The longer the Romans lived in Galicia, the more likely it would be that their own word, petram, born of a sunny, faraway city built on volcanic rock, would have reshaped and softened and rounded, little by little, to suit the pedra they saw around them. 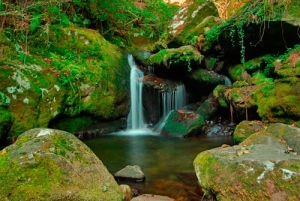 There comes a point when the green around you suffuses the words that survive. And a point when the origins of a word become irrelevant. Pedra is no longer an invader word. It’s an official member of the Galego word-hoard. The softening of the central consonant rebalances the word, the reshaping softens the ‘p‘ consonant. Where petra was too swift and sharp for Galicia, pedra is a slower, rounder, heavier sound. A sound that suits a land of moss and mountains.

The pedra/rock of the Galician countryside is one thing when it’s left or rearranged in the living wild and quite another thing when it’s hewn and forced into monastery/prison walls. The strength of stone becomes a cold, barren force. Celso Emilio Ferreiro is one of the most famous Galician poets and Longa Noite de Pedra/Long Night of Stone is one of his most famous poems. Pablo introduces the poem in English and tells you just enough about its chilling birth to give you an extra level of respect for the poet, the poem, the Galician people and the rebellious survival of their language:

Why write about a Galician band on a blog about singing in English? Because, at the heart of all music is the human heart. Pablo Ursusson lays his heart bare when he sings. The emotion he expresses transcends language. It touches you, just as English songwords touch the hearts of listeners all over the world, whether they speak English or not. When you sing from the heart in any language, the words are the icing on the cake. They’re not the cake itself.

If you don’t speak Galego, you have a wonderful opportunity here.  When you listen to Pablo Ursusson singing, you are listening in the pure, powerful way a baby experiences the musical shape of the sounds of its mother tongue, in the safety of its mother’s arms.  You listen harder, but the words of Galego wash over you in a way your native language never can, now that you have captured and controlled it at school. All you can be sure of is Pablo’s intention and his emotion. That’s a gift.

If you’re a native English speaker reading this and listening to Sangre de Muerdago, relish the tiny insight you’re getting into how the words of the Beatles’ Hey Jude or Pharrell Williams’ Happy sound to a teacher in Japan or a fisherman in Galicia. Sometimes we native English speakers forget our privilege. And sometimes we forget how language in song transcends dictionary understanding.

Stepping outside your own easy bubble of understanding is interesting for a listener and crucial for a songwriter.

When you write a song in English, or in any language, never let the laziness of overfamiliarity inform your final word choices. Words will skip into your mind as you create, alone or in phrases. Sometimes the clichéd words will push their way to the front. Don’t let them bully you. Taste every word. Does it feel right in your mouth as you sing it? Does its shape sit well with the music? Is it the best word? How can you sing the best version of the best word into being? (Think of this and this and this)

Listen to Sangre de Muerdago and think – where in the sounds is the sadness? The shape of the vowels? The soft consonants? The music alone? Where does Pablo make the emotion stronger? How does he do it? Through leaving gaps? Through varying the way he sings a sound that repeats? Through stretching a word in a slightly unusual way? Some other way? The answers will be individual to you – but the exercise of listening with attention will inform your own singing.

None of this is an intellectual exercise for singers – Pablo isn’t thinking “I know, I’ll elongate this vowel a little for extra melancholy.” No singer consciously changes the shape of their mouth or the shape of their breath as they sing. All the thinking takes place before you step on stage, but the more you’ve prepared, the freer and better you can be.

I’d guess that the fact that Pablo Ursusson works with musicians from other countries and tours to countries where Galego isn’t in common use enhances the way he uses his mother tongue. He carries his love for Galego with him and warms the language as he sings it. There’s none of the laziness of a shared mother tongue. The other musicians relax into respect and celebration of Galego, harmonising like native speakers. It’s a joy to hear.

If you ever get a chance to see Sangre de Muerdago, do. They tour internationally – they were in China and Taiwan last year, at the moment they’re in Italy, moving on to Germany. You don’t need to speak Galego to connect with their music. The sound of the words will reach out to you.

By the way, if Sangre de Muerdago aren’t travelling to your neck of the woods soon, their music is available to download on Bandcamp here.

If you’re a Galego speaker looking for an exercise in listening for emotion in another language, try this Russian folk song Под ракитою зелёной/Under a Green Willow sung by the wonderful Pelageya. Where is the melancholy?